Alava - Vitoria-Gasteiz and the center of Alava

The province of Alava is located in the west of the Basque Country on the Spanish side, it is the third province of the autonomous community of the Basque Country (with Biscay and Guipúzcoa). It is a singular territory , which differs from the others by its absence of coasts and by its landscapes. There are very beautiful natural lakes , protected and wild areas, it is a popular place for sports enthusiasts and outdoor enthusiasts. Gastronomy has its place in Alava, especially wine , the territories of the Rioja Alavesa are known for the excellence of the vineyards. Vitoria-Gasteiz is the capital of the province and also of the Autonomous Community, it is a pleasant, pedestrian and spacious city where life is good (literally and figuratively). Besides, the majority of the population (almost 80%) of the province lives there and the rest is rural and sparsely populated. 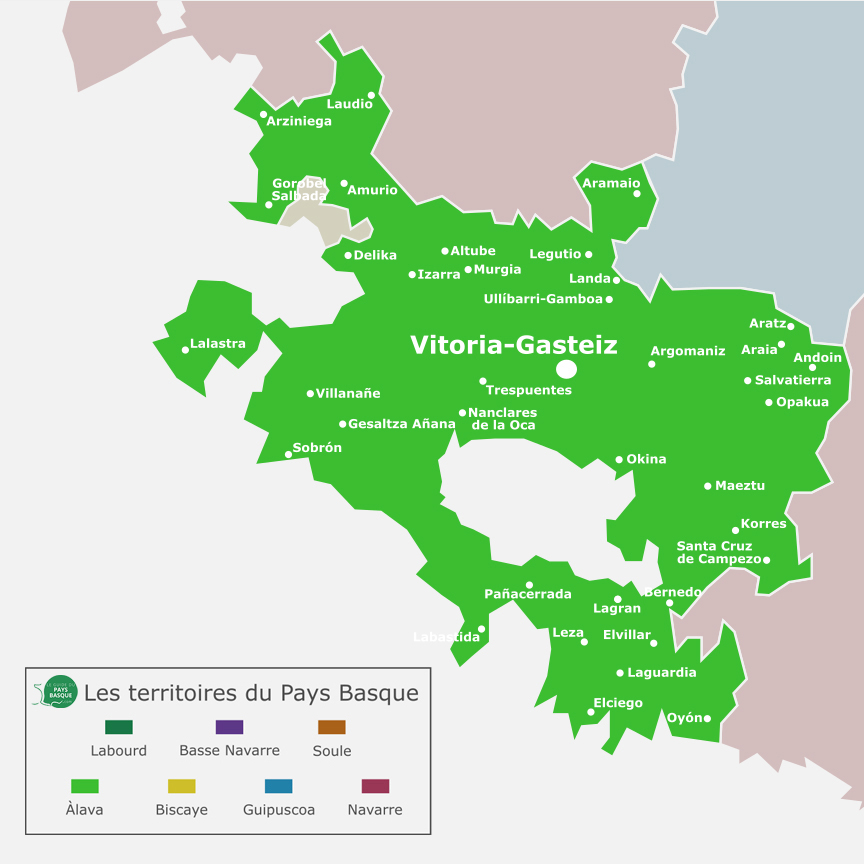 Map of Alava and its main cities 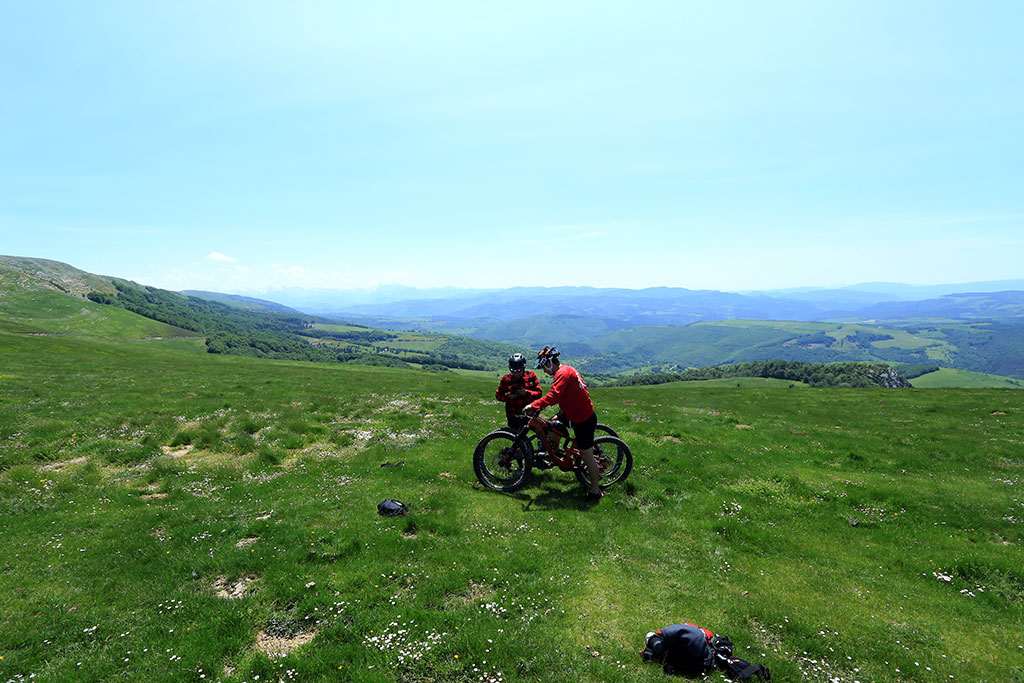 Note, to visit Alava, take the circuits offered by the Tourist Office.

It is therefore our starting point for the discovery of Alava: Vitoria-Gasteiz . It is the capital of Alava and Euskadi , as soon as you pass the city gate you will feel good there. Clean, spacious, responsible (ecological), it is a pleasant and relaxing destination . Everyone will find their account: lovers of heritage and history will be charmed by its medieval almond (Almendra) , its compact and preserved historic center, with the very beautiful Gothic cathedral Santa Maria which is at the top and protects the city with his kind look. Many of the streets in the center are pedestrianized , which is nice for strolling, shopping, stopping at a small restaurant to eat pintxos then continuing and observing the beautiful buildings. Walk the streets to see the other churches: San Miguel , San Vicente and San Pedro , the beautiful buildings dating back 8 centuries and the palaces in the Renaissance style. Enjoy the monumental wall frescoes that adorn certain walls of the old town during your walk. 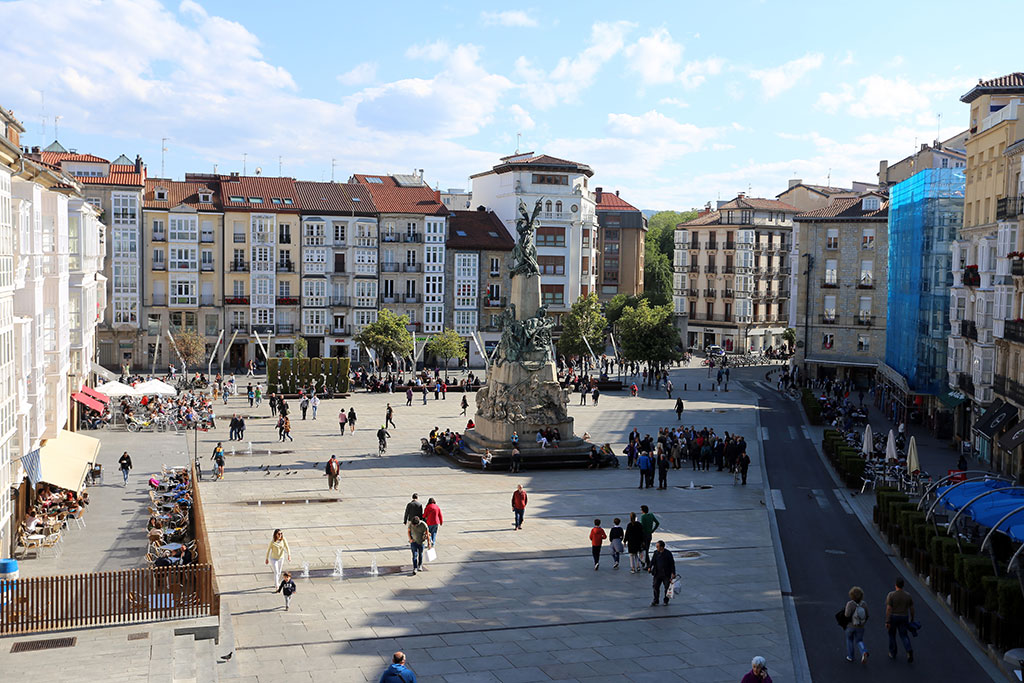 Vitoria-Gasteiz , the capital of Alava and Euskadi 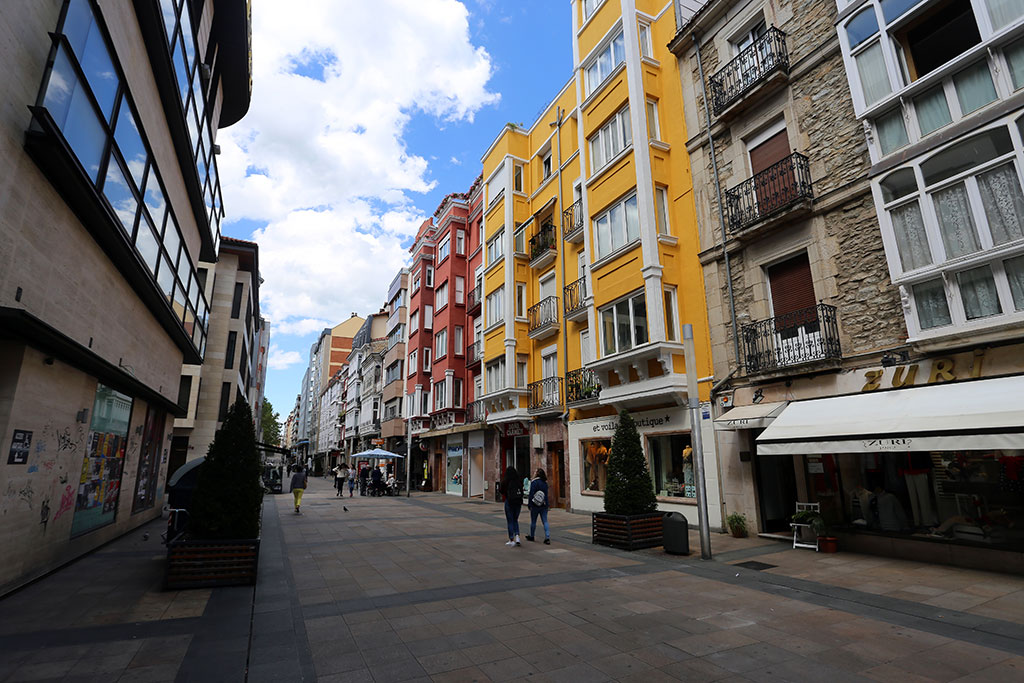 The colorful streets of Vitoria-Gasteiz

Culture lovers will be happy to visit museums : The Basque Museum of Contemporary Art and its permanent and temporary exhibitions which change regularly. The Diocesan Museum of Sacred Art of Alava , the Museum of Natural Sciences of Alava and its geological and botanical collections, located in a very beautiful medieval tower, the Museum of archeology , the Fournier Museum of playing cards , which Lovers of spades and kings of clover will enjoy, as it exhibits an impressive collection of 3000 decks of cards. The Museum of Fine Arts ,   and finally, the Armory Museum for lovers of weapons and helmets.

Vitoria-Gasteiz is a fairly large city, if its historic center can be visited on foot, for the rest do not hesitate to take the tram and buses that efficiently serve the rest of the city. Another option, very timely in this ecological city, is cycling! Green lovers will be happy with their stay in the capital of Alava, since a green ring (Anillo verde) of no less than 47 km surrounds the city with remarkable parks and gardens. Singing rivers, lagoons, oak forests, fauna and flora of character ... From up close, wetlands and all ecosystems are of great ecological value and pleasure for the inhabitants and tourism. In the west there is the Zabalgana forest park , then in the east it joins the Salburua park , and that of Gamarra just after, and the green area of Olárizu and finally, to complete the loop, the forest Armentia. 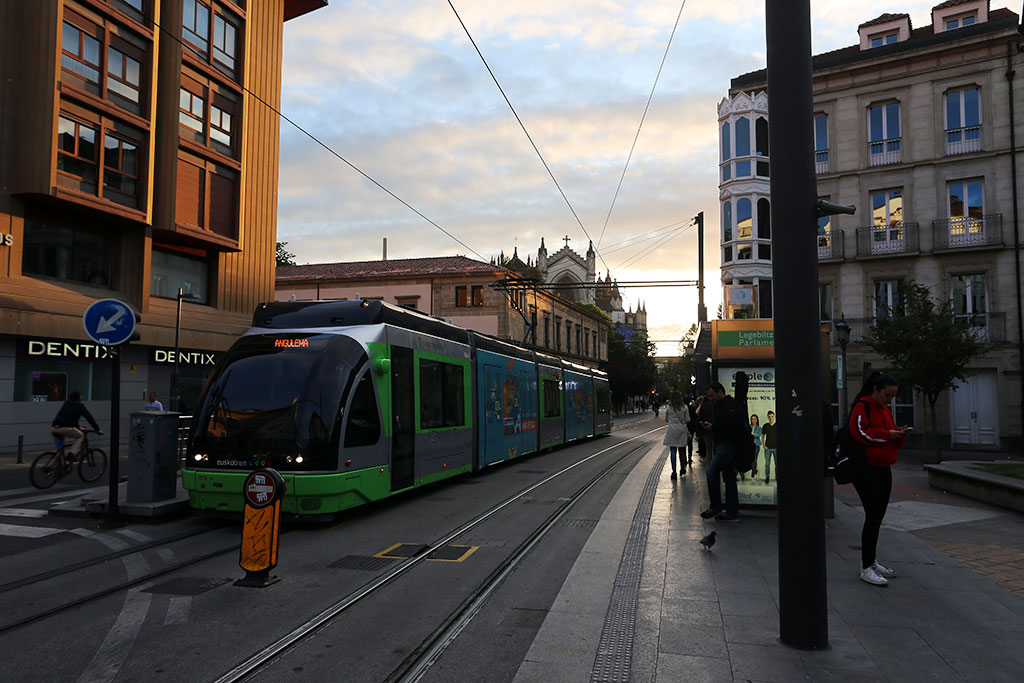 The green ring of Vitoria-Gasteiz

Vitoria-Gasteiz will certainly be a perfect starting point for your getaways in the rest of Alava, do not hesitate to spend several days there. It is not (yet) an eminently touristic city, beyond Jacquaire tourism, and its absence of coasts should not dissuade you from stopping there ...

West of Vitoria-Gasteiz,   Trespuentes is a place on the plain, in the municipality of Iruña de Oca , to discover for its Roman bridge dating back to Antiquity , composed of 13 semicircular arches. Nearby, venture into the ruins of the Monastery of Santa Catalina , worthy of a film and valued by a botanical garden , it is a pleasant place to stroll on a beautiful day. There is also, not far away, the very large and precious archaeological site of Iruña-Veleia , an ancient Roman oppidum, the most important in the Basque Country. 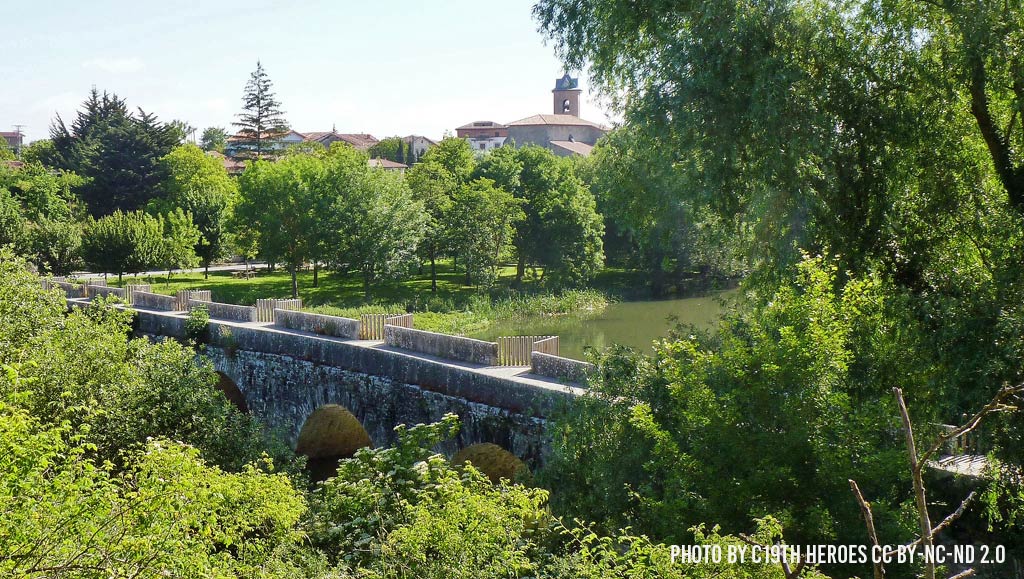 A little further west, embark on a complete change of scenery in Salinas de Añana , in the salt valley. Listed as a national monument, salines and salt mines take advantage of the mineral salts of the Muera River . Yes, you are far from the sea and yet ... There is a lot of salt here and since the 10th century it has been recovered, evidenced by wooden structures, evaporation ponds , canals, shops ... Come and taste a fleur de sel like no other and take a guided tour of the farms. The top is to visit the site in the summer, because evaporation is at its maximum, all the structures are covered with salt ... Note that there is a small spa that lets you bathe your feet and hands in the Beneficial salt water ... After the visit, take a stroll through the town which rises on the hill above the pools. We alternate between the medieval and the Baroque ... To the west of Añana is Tuesta , a small town which houses the Cathedral of Valdegovía from the 13th century. Observe the portal and its magnificent ornaments, it can be discovered on guided tours. 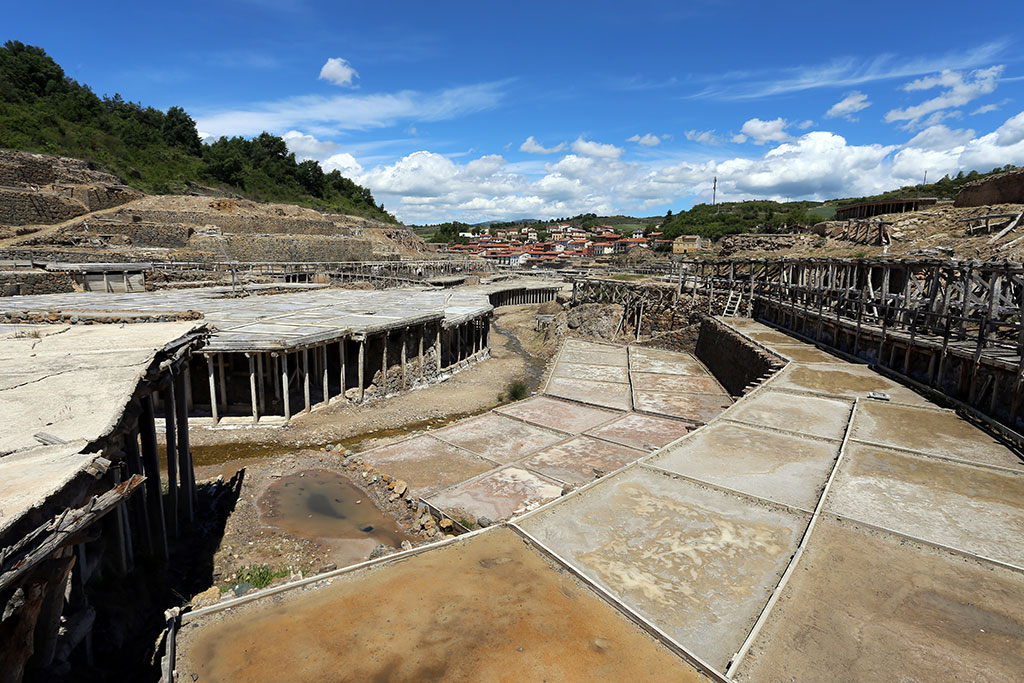 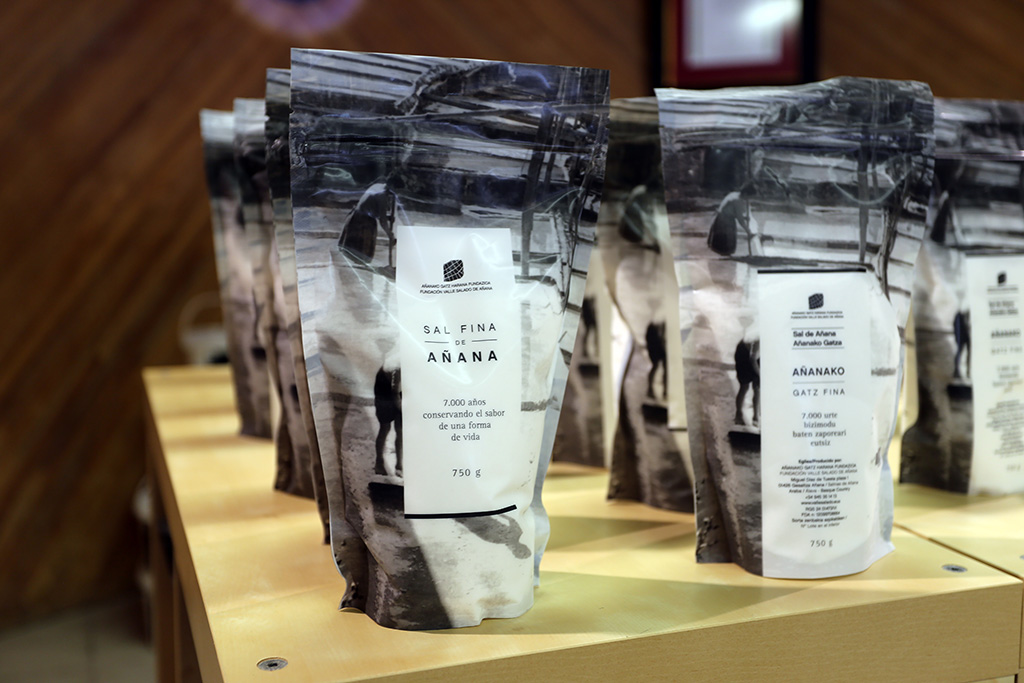 The fine salt of A ñana

A few minutes to the south, go relax and take a stroll at Lake Arreo which is the largest natural lake in the Basque Country. It is a wetland which shelters a great diversity of fauna and flora.   There is a small hermitage not far from the banks.

Sobrón stays on the launch of Añana, to tell you the wonders of water .   On the banks of the Ebro, it is an old spa . The nature around the city is classified Site of Community Interest, for the richness of its biodiversity . Children and adults who love adventure will enjoy spending a day at the Sobrón Adventure Center theme park, canoeing, diving, paddleboarding, and other nature sports such as shooting the arc. To complete the discovery of the town, do not miss a visit to the Water Museum (Museo del Agua), which offers modern and attractive educational content.

Villanañe, a little to the north, is interesting to see a tower which contains a local legend. Imposing, rectangular, the Torre-Palacio de los Varona is a national monument inhabited by the direct descendants of the Varona family for 9 centuries. It is said that over all these years, the family has only produced male descendants ...

Sobron and its great waters

Lalastra in the far west of Alava is located in the Velderejo Natural Park , a very small park with magnificent views of the peaks where a colony of vultures has taken up residence. A little touristy place where walkers will appreciate the 9 marked trails . Go to the Maison du Parc for information on the routes and visit the Rural Interpretation Center before that . Children are welcome in this region where play areas are present as well as agrotourism visits to farms. Many megalithic monuments, ruins, ancient Roman paths and medieval paintings are displayed in the small hamlets of the park.

We are now leaving east of Vitoria-Gasteiz , in the direction of Aratz , in the Aizkorri-Aratz natural park , bordering the Gipuzkoa, a limestone massif with high peaks suitable for climbing and mountaineering. 16,000 ha for hiking and soaking up Basque legends, mythology and old disused mines in this region. At the border between the two provinces, go to the San Adrian Tunnel (departure from Zalduondo, 5 km walk, not always easy ...), which shelters at the end of its 70 m, a chapel in a setting of rocks , pilgrims, walkers in medieval times once took this route. In the same area, near the town of Araia is a hike to the Castillo de Marutegi, the ruins of a fortified enclosure and a castle of the 11th century: a beautiful view of the surrounding countryside awaits you from there. high, but you will have to climb and be careful not to injure yourself! For a ride more suitable for children in the same area, go see the waterfall at the source of the Zirauntza river .

A few kilometers to Andoin , the Cascada de la Tobería is also worth a visit after about 2 kilometers of walking, on a fairly rugged path. In the same sector, there are megaliths, on the site of Cromlech Mendiluze and in the direction of Salvatierra , the Dolmen of Aitzkomendi and that of Sorginetxe , in the Sierra of Entzia where you will be surprised to see animals roaming free many Pottoks (small wild ponies). 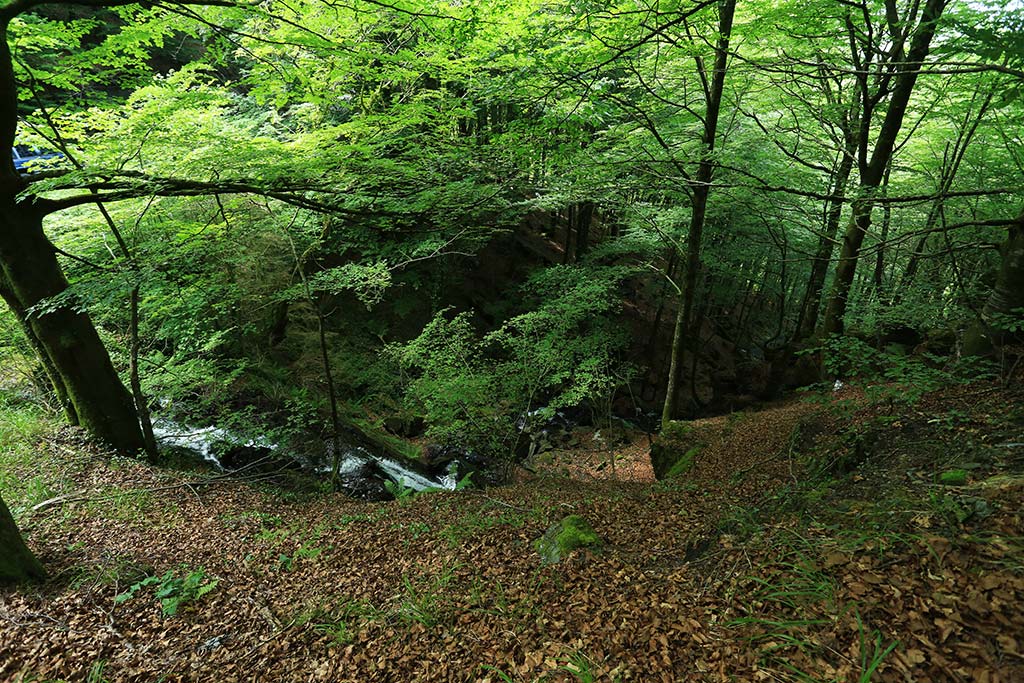