Biscay- The hinterland of Biscay

If Biscay is a modern, even avant-garde and populated territory near the coast, it is nonetheless fascinating inside . The industrial heritage left by the mines, the medieval villages flanked by lush mountains and the parks with unspoiled nature, will make you appreciate it as much as its beaches! 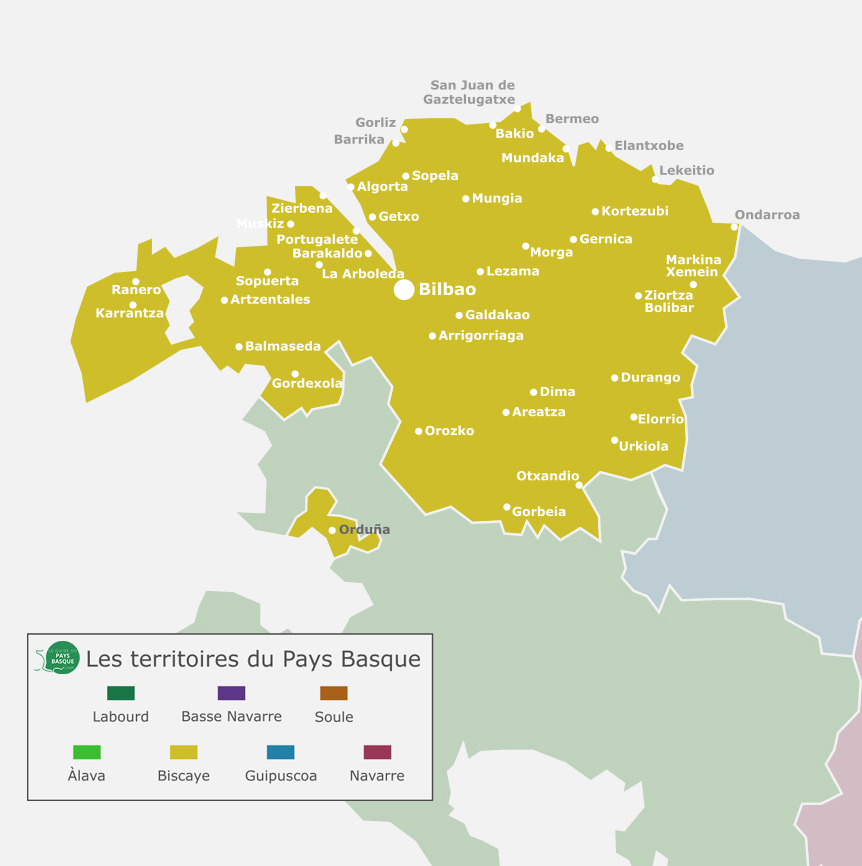 We start east of Biscay, with Markina-Xemein in the Lea-Artibai basin . A recent municipality resulting from the merger of 2 localities. It is at the limit with Gipuzkoa. Visit the ancient medieval town which has a rich civil and religious heritage. Do not miss the Church of Santa María de la Asunción de Xemein which is a national monument classified in Renaissance style and the chapel of Saint Michael of Arretxinaga with its 3 megaliths which protect the altar. The city conceals a good number of palaces of Gothic or Baroque style , 3 towers and a rural architecture worthy of interest.

The Chapel of Saint Michael of Arretxinaga with its 3 megaliths

In the southwest, the village of Ziortza-Bolibar is located in the same basin, it is a very old medieval village. There is the only collegiate church of Biscay , which is also on a Jacquaire road: the Collegiate church of Cenarruza . It is the city where the ancestors of Simón Bolívar come from . There is also a museum in honor of the Venezuelan " Libertador " who emancipated the Spanish colonies in South America. 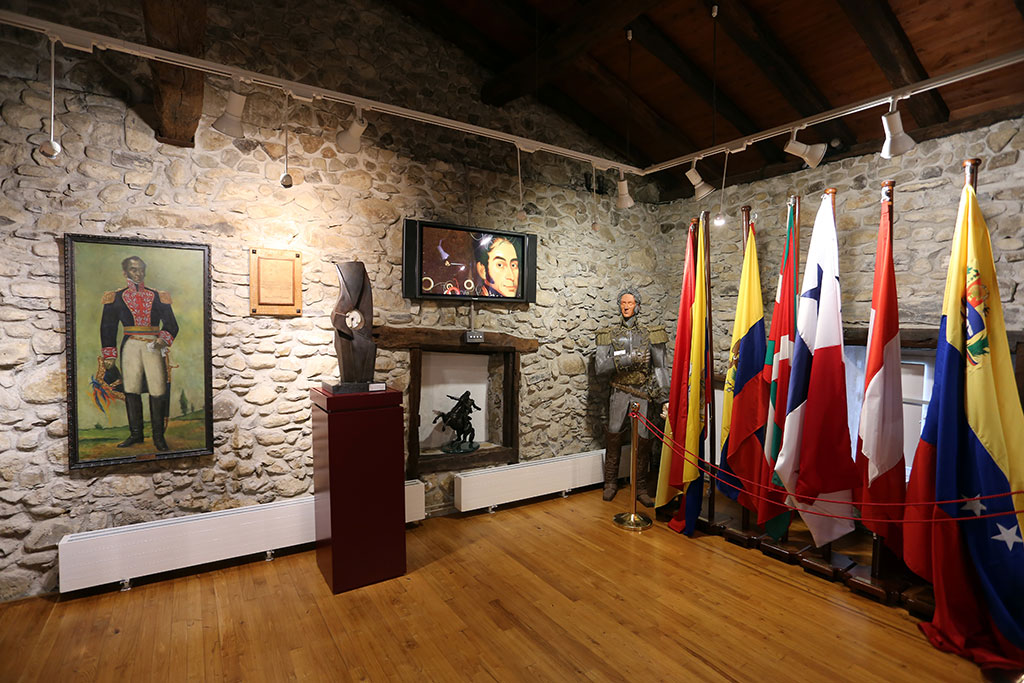 Much further south, Durango is an ideal vacation spot if you love nature and history. It is at the crossroads of 3 natural parks (Urdaibai, Urkiola and Gorbea) and crossed by the Ibaizabal river . Like many municipalities in the region, it was the secondary sector with its forges and the processing of iron that gave it its economic development. The old district of Durango is developed around the beautiful Basilica of Santa María de Uribarri and its large wooden portal. The Kurutziaga cross dates from the 15th century, it is over 4 m high and represents a heretical section of the history of the city. Several palaces and beautiful houses make up the city's civil heritage. Durango is a place conducive to excursions to the 4 corners of Biscay, for hiking, climbing, enjoying the invigorating mountain air. 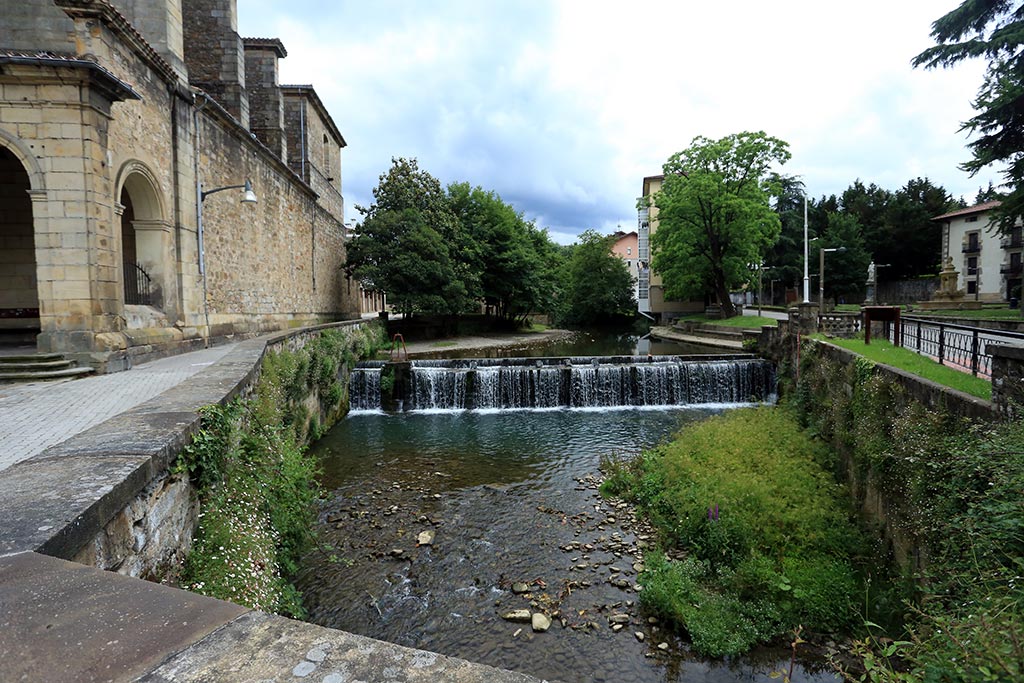 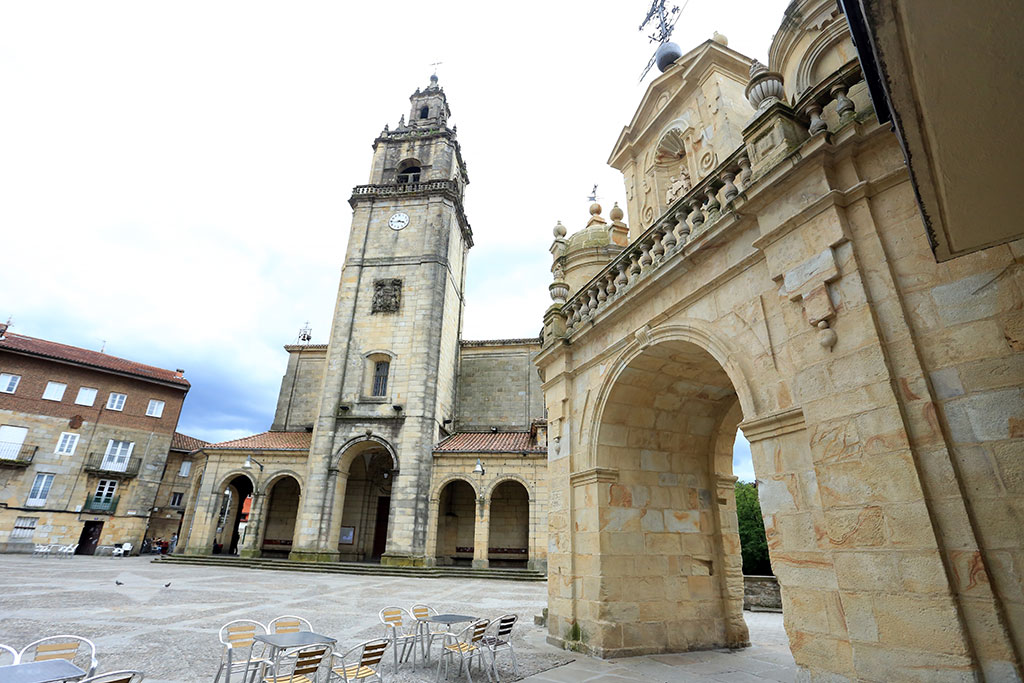 Atxondo just below, is an interesting village to see on the road to Elorrio. It is like nestled in the mountains, in the middle of peaks exceeding 1000 m above sea level. Take a walk to appreciate the landscape and don't hesitate to have a lunch break, you can eat good local gastronomy there.

The gastronomy of the Spanish Basque Country

9 km south of Durango, Elorrio (which is considered one of the most beautiful towns in Biscay) awaits you for a visit to its old quarter , a monumental complex classified as a property of cultural interest and dotted with houses and beautiful palace. The Town Hall will suggest a walking route so you don't miss anything! Have fun looking for the 69 stone coats of arms , cut from this set and the 9 dispersed calvaries .   Go see the town hall and the Basilica of the Purísima Concepción . A wall surrounded the city, only a vestige remains: the Don tello door . The Necrópolis Argiñeta will attract your attention with its 12th century stelae and sarcophagi.

You are at the foot of the Urkiola natural park, which consists of acerbic and limestone mountains, a real paradise for climbers and for mountaineering . In Dima , people who do rock climbing or caving will be delighted to go to the caves of Baltzola . All around, hikes, magnificent circuits to discover for athletes. The park extends to the south of Biscay in Otxandio. Nearby, in the Arratia valley , Areatza is a medieval town, which also enjoys a listed monumental complex. Stroll through its cobbled and steep streets, discover the sumptuous palaces, the town hall. You are a stone's throw from Gorbeia Natural Park and you can find out more at the interpretation center located in Areatza. To learn more about Basque traditions and life in Biscay over the centuries, go to the village of Artea , which houses the Ecomuseo del Caserío Vasco (Ecomuseum of the Basque House), there is also the Museum from the Historical Archives of Nationalism .

Otxandio is a charming town to the south, on the border with Alava. It is at the heart of natural parks and this scenic beauty is matched only by the keen architectural interest of its old center. Founded in the 13th century, Otxandio can be visited starting from the Plaza Mayor . We walk around to see the Town Hall and its sandstone facade, the arcades and large balconies, the coats of arms and the sundial . Right next to it, the pediment for playing Basque pelota, a beautiful fountain and the Santa Mariñe church and the Bolaleku , a place intended for the practice of the ancient bowling game, the bolatoki, transformed into an exhibition space.

The Gorbeia Natural Park occupies the entire southern part of the tip of Biscay. Its highest peak is 1482 m, it is a popular place for mountaineers and this mountain range borders the Alava. Speleologists also appreciate this park which has more than 500 cavities . We see wild animals, ageless trees and tall karst formations . It is a diverse landscape and sometimes like coming out of a film, with the warm colors of autumn or the softness of spring. Explore the Itxina massif , a reserved and protected place, which can prove to be labyrinthine and will require the help of a guide or a very good study of the topographic map before a hike. Waterfall enthusiasts will enjoy going to the very accessible belvedere of Gujuli waterfall , to contemplate the 100 m of the waterfall. In Orozko to the west, the old town has some beautiful buildings and in Casa Palacio , you will visit an ethnographic museum on 3 floors that will tell you about life in the lands of Gorbeia. Take the opportunity to watch the tower of Aranguren and the 18th century bridge over the Altube river . Take a stroll around, to see menhirs , the ruins of a feudal castle and a pretty photogenic dam. 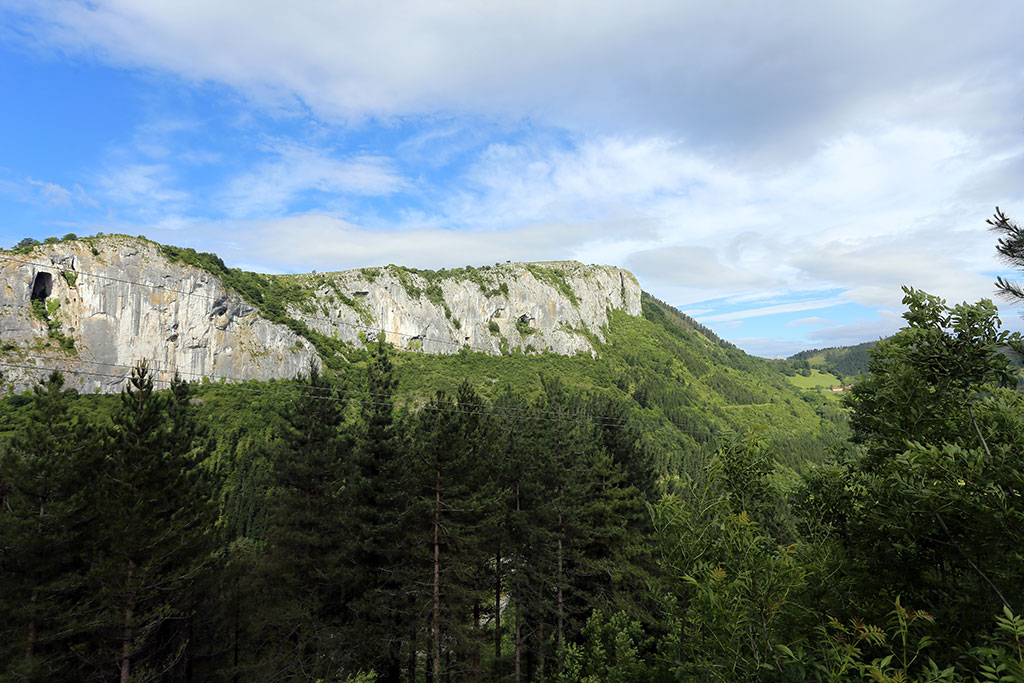 Going up towards the Ria of Bilbao, Arrigorriaga , a city with red stone buildings which contain several legends, including that of the Battle of Padura which was so bloody as the river   Nervion was tinged with red and permeated the stones of the city. It is during an educational walk with educational signs that you will know more ... Note that Arrigorriaga is not far from Bilbao, travelers who want to save money can decide to stay there to then make daily excursions to the natural parks on one side and Bilbao and the beaches on the other. The same goes for Galdakao where the Ibaizabal river flows which joins the Nervion to form the estuary of Bilbao. Visit this city to see its hermitage, its 3 pretty country bridges and El Gallo, a monument which is at the crossroads of several roads, including that towards San Sebastian.

20 km south-west of Bilbao, towards Alava, there is Gordexola , a very green and even lush valley which records a lot of precipitation . This is why the region is dotted with small streams, rivers and water points which were long used for the iron industry , through mills, dams and canals.   There are many good reasons to come here, the first is architecture . We see sumptuous and rich palaces, bourgeois houses and gardens teeming with plants. Another good reason is mechanical sport . In the mountains, an enduro motorcycle race takes place, the Gordexola Xtreme , reputed to be very difficult (and we understand that, given the elevation differences!)

Head north towards Balmaseda in the Las Encartaciones region . It is said that the 1st village of Biscay was founded in 1199. It was a fortified city well located at the crossroads of several roads, it then benefited from the development of communication routes for its demographic and economic boom . Today, in addition to the know-how around metal, Balmaseda is known for its furniture industry . For the tourist, it is an interesting starting point to touch the rural Biscayan culture. Stroll through its historic center via the charming Puente Viejo de La Muza bridge and its tower (formerly a toll booth!), Towards the Church of San Severino . About twenty minutes away, note that the museum   Boinas La Encartada is interesting for who wants to know more about the textile industry. 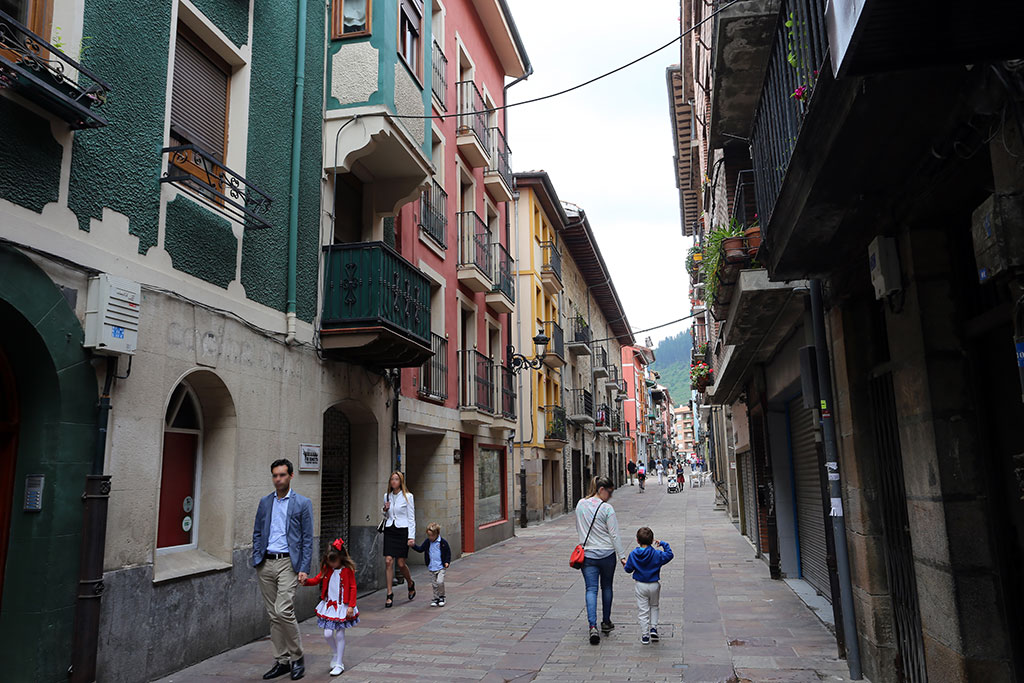 The streets of Balmaseda 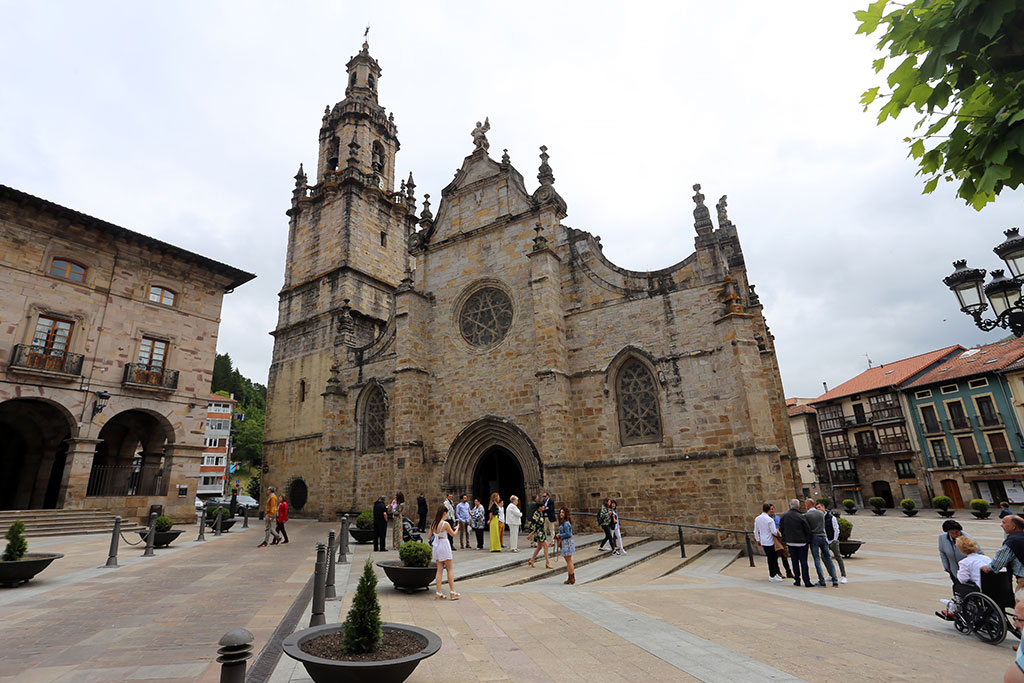 Artzentales further north-east is a place to go to find peace. It seems that the locals say that there are more cows than inhabitants ... Surrounded by mountains, you will hike in the Alen mountains, will come across an old small mining village, because the region was known for the wealth in copper and iron from its basement. To relax, you can enjoy simple but pleasant leisure areas in the surrounding area. 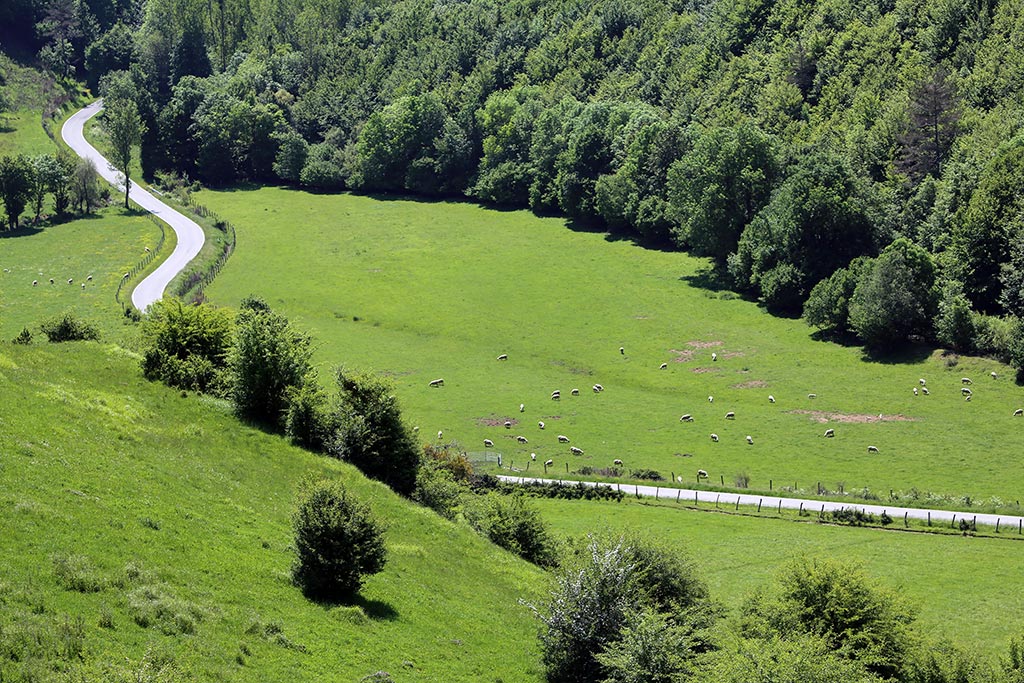 Karrantza is in the far west of Biscay, it is a quiet and rural town, where it is good to walk and appreciate the beauty of the landscape. The region is not yet very developed for tourism, this is an opportunity to take advantage of it. Lovers of concretion caves will be happy to visit the magnificent Pozalagua cave which is home to one of the most beautiful and large concentrations of stalactites and stalagmites in the world! A breathtaking and anarchic spectacle where the eccentrics , these facetious concentrations that grow in all directions, are spectacular. Always in nature, is the route of megalithic Haizko, for lovers of menhirs and remains of the Neolithic.   With (or without!) The children, visit the Karpin Abentur theme park which hosts an impressive collection of wild animals (real, living), but also reproductions of dinosaurs (fakes!). You will then appreciate the richness of nature while crossing the eras of the History of the earth. In the city is the old church of Biañez which is today a museum and some beautiful houses. 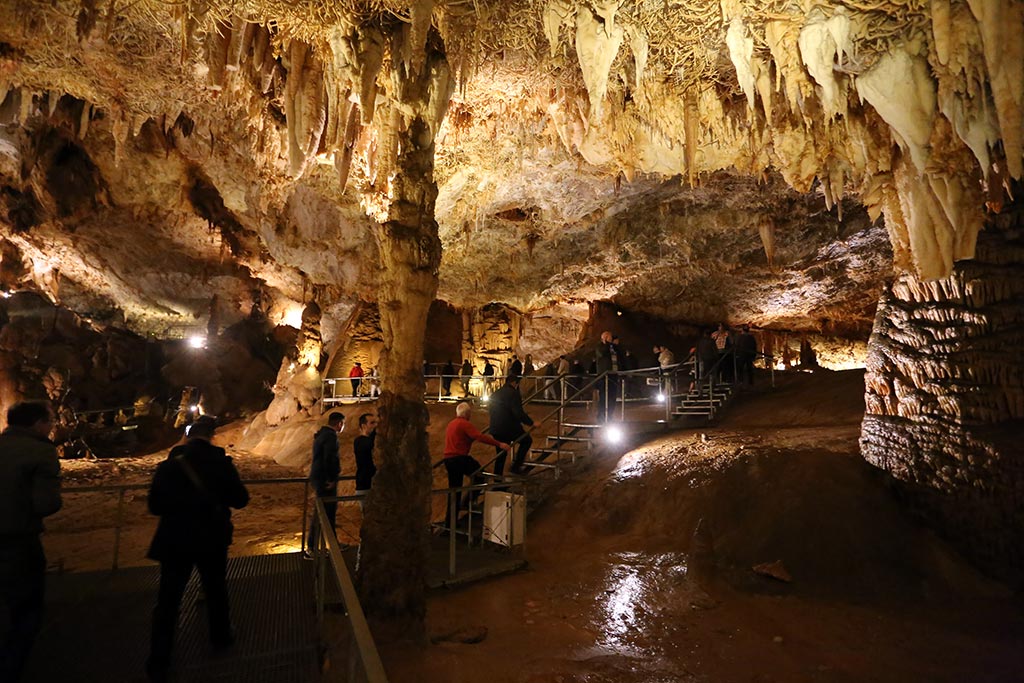 Urduña-Orduña is an enclave of Biscay which is located in Alava about forty kilometers south of Bilbao. It is a place rich in History, classified as a historic monument since 1997. In the Middle Ages, it was its geographical location that made it an important trading hub and a customs stop . The customs which is in the large Plaza de los Fueros, is also converted into a spa . Take a walk in the city, ask the Tourist Office to present the heritage routes to you. Urduña-Orduña is located in an attractive area, nearby you can enjoy sports in the Sierra Salvada . A very beautiful waterfall is located near the source of the Nervion: the Saut de Nervion which is 270 meters high and it is quite simply one of the most beautiful waterfalls in Europe ! Whether the water is present or not, we recommend that you take this short 2 km walk to access the belvedere where the view is breathtaking. 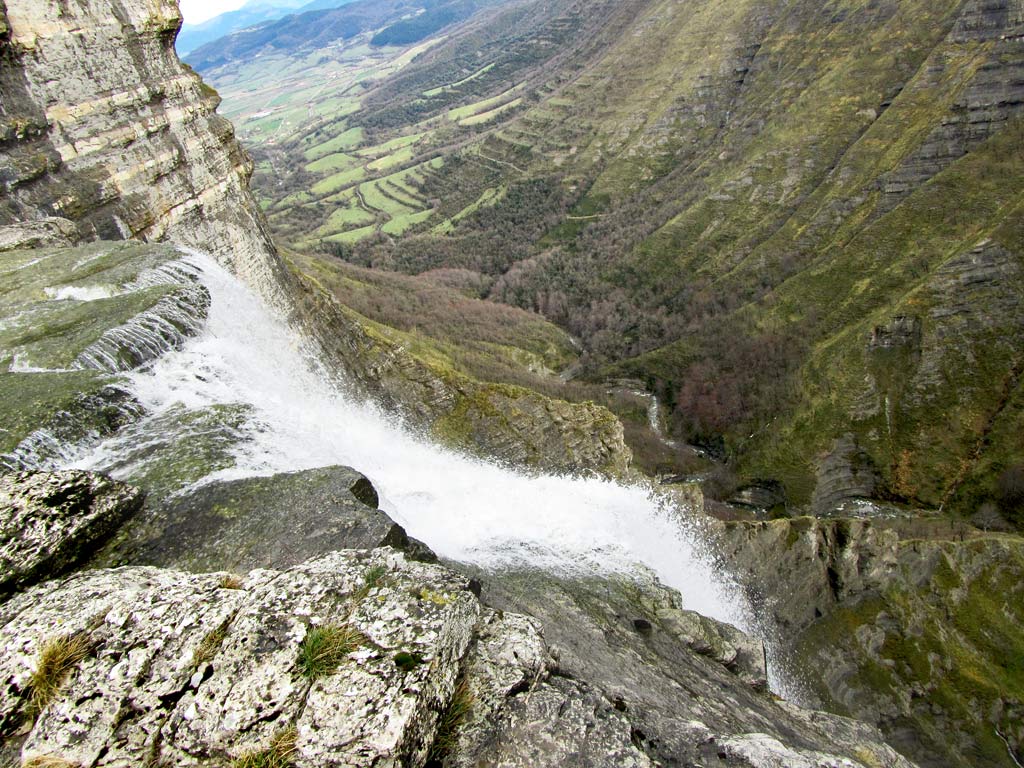 Nervion jump, view from above 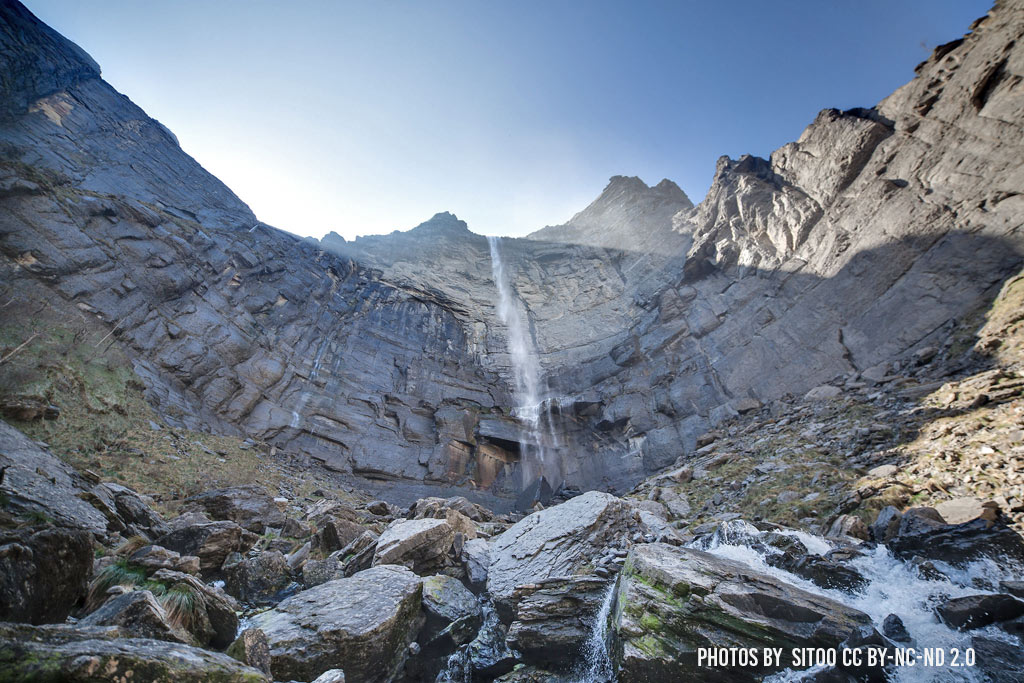 Nervion jump seen from below