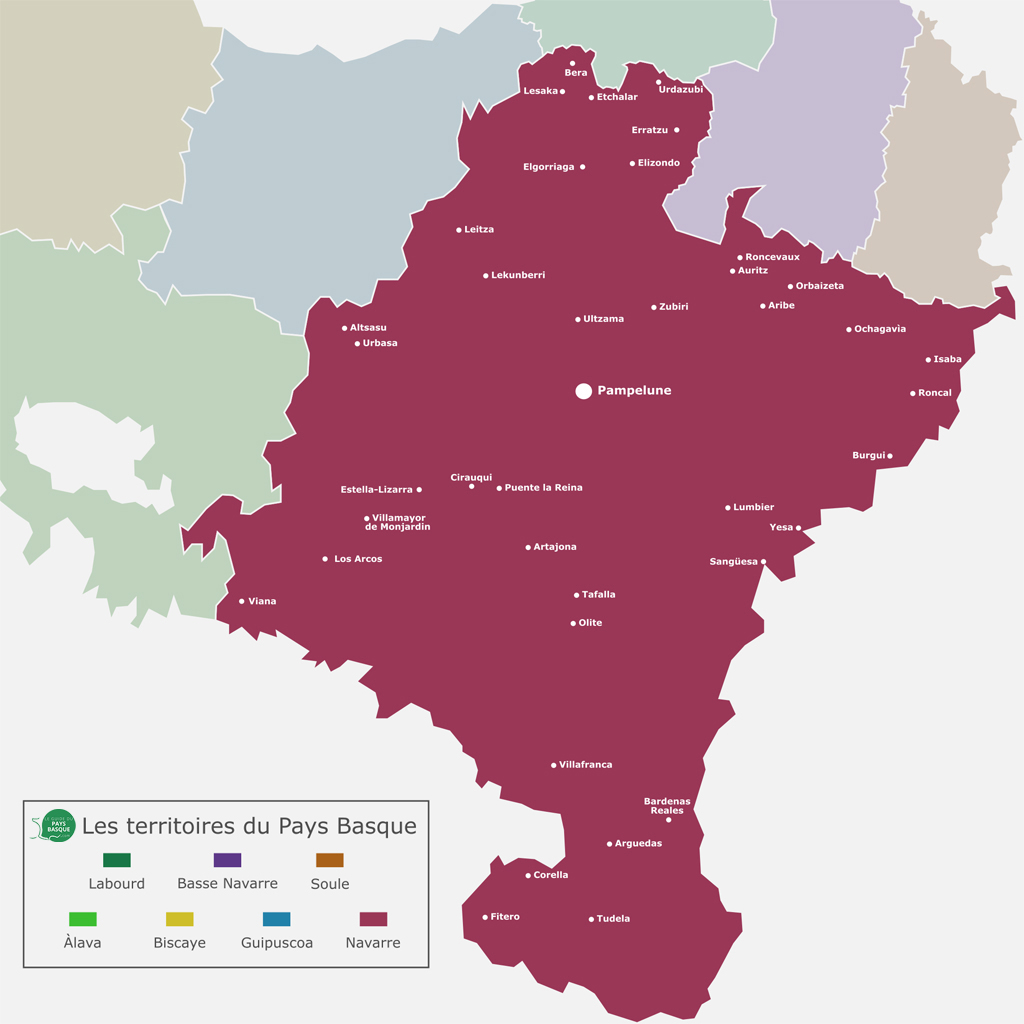 Pamplona (Pamplona or Iruña), is the largest city and the capital of Navarre . Its name probably evokes you in the first instance, the feasts of Saint-Firmin also called Pamplona Feasts. This highly anticipated and appreciated event, which takes place from July 6 to 14, is a very large Feria (a party with bulls) that turns the city upside down for 1 week. Pamplona is also a rich historical past , which dates back to 74 BC and which you will discover during a pleasant walk on the covered way ( Paseo de Ronda ) to admire the old fortifications of the city and visit the Interpretation Center of the Pamplona Fortifications .

The old fortifications of the city

The city has beautiful churches and monuments, in itself it is not particularly remarkable, but warm. Start your visit with the old town (mostly pedestrian), the most attractive historic district that surrounds the Castle Square ( La Plaza del Castillo ), bright and unobstructed. All around there are many places to eat and enjoy life. Sit comfortably on the terrace, it's nice and you are in the footsteps of Ernest Hemingway when writing his novel " The sun also rises ". It is here that events such as concerts and parties take place, as well as the market. 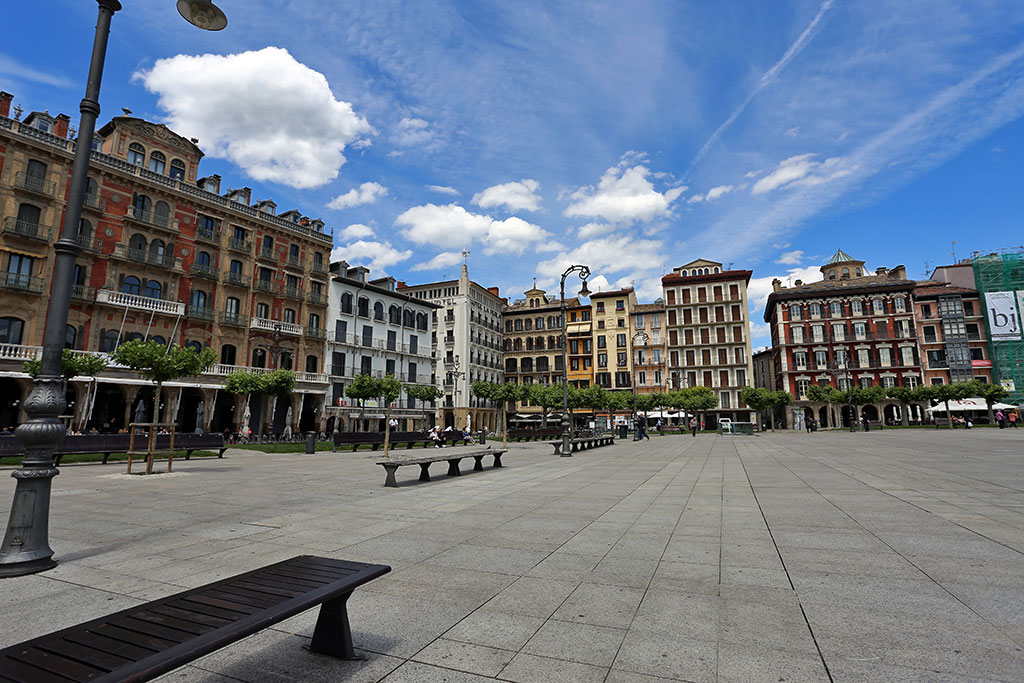 From the square, take part of Estafeta Street and reach the Cathedral of Santa Maria la Real (Pamplona Cathedral). It dates from the 13th century, and was built on the very spot where the Romanesque Cathedral was located. It was not until the 16th century that it was completed. Built in a Gothic style, with neoclassical touches, it is as beautiful inside (appreciate its cloister ) as outside. It houses within it, the Cathedral Museum . Continue your stroll through the historic district to the Navarre Museum , which will present a collection of objects from prehistoric times to the present day. Pass in front of the neo-classical baroque town hall and in this district, the churches of San Saturnino and San Lorenzo are also to be noted as remarkable. 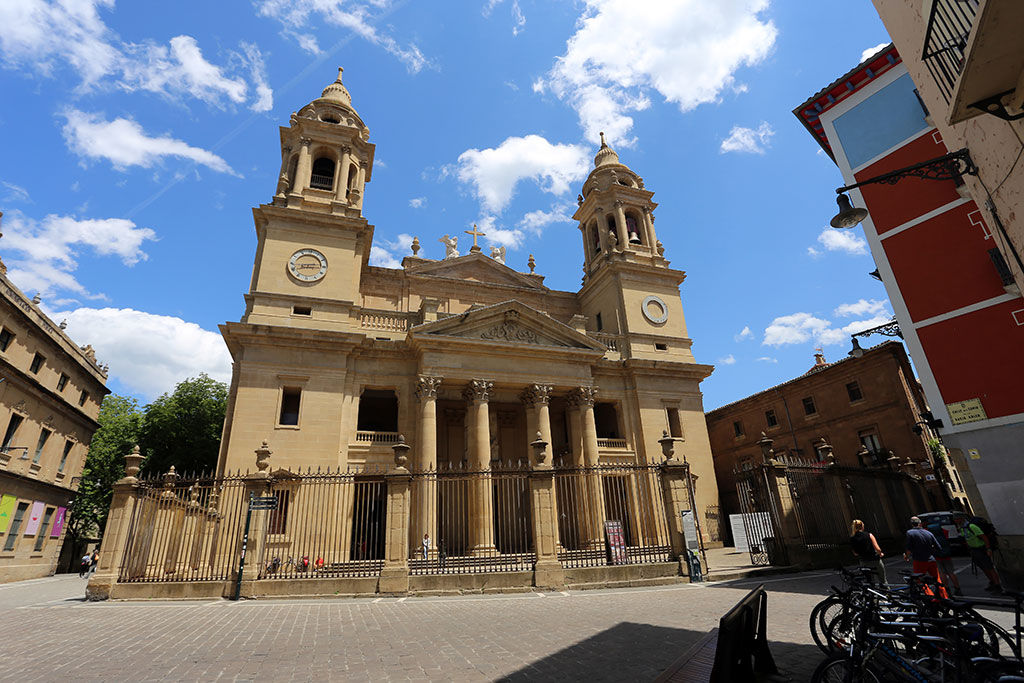 Want to walk? Discover Pamplona on the urban trail that begins at several points in the city and allows you to walk for 3 hours, guided by signs and directions. Do you prefer greenery ? Go for a walk along the Arga river park , a cool oasis near the city. Pamplona is rich in green spaces. The Taconera park, which covers 90,000m2 , near the old town, is in a French garden style. An animal park where you can easily see deer, peacocks, swans ... will amaze children. The Citadel is a green park nestled in a vestige of military architecture built in the 16th century. Very large, it houses cultural events. It is taken by storm at the Pamplona Feasts, we fireworks there every night and it must be admitted, it is a place where many stay during the holidays! For a little Asian side, visit the Japanese park of Yamaguchi (town twinned with Pamplona): waterfalls, small bridges, geysers, well-cut and multicolored trees will inspire you a lot of Zen… There is also the Medialuna park and its belvedere.

Also to do in Pamplona:

Now let's talk about the Pamplona festivals (Sanfermines) which take place in honor of Saint Firmin . If you like to party, the entertainment, the hustle and bustle, the merry mess, dancing, drinking a lot, eating and having fun, this is the perfect time to visit Pamplona . These celebrations last 9 days , at all hours of the day and night from July 6 at 12 noon. Some come from afar, dressed in white with a red scarf around their necks. Thousands of people of all ages gather in the city and its surroundings, occupying parks, gardens and all the spaces offering a little nap between two animations. What's going on there? Concerts, bullfights, dances, theater performances and street noise, noise, noise ... Parades, processions, dances, big heads and other giants of costumes ... The most incredible shows, it is the 'encierro : a chase of bulls , oxen and spectators. Yes, you read correctly. Every morning at 8 am sharp, the bulls, who are the kings of the bullfighting show in the afternoon, gallop up the streets at triple gallop, from the city center to the arenas . In front of them, the brave (crazy?) Run at full speed in white with their red scarf, to accompany the bulls trying not to be bitten or trampled. This happens quite often because it is a perilous exercise where the excitement of the public, the fear of runners, galvanize the animals. The best thing is to watch videos to understand the magnitude of this event and its completely improbable nature… 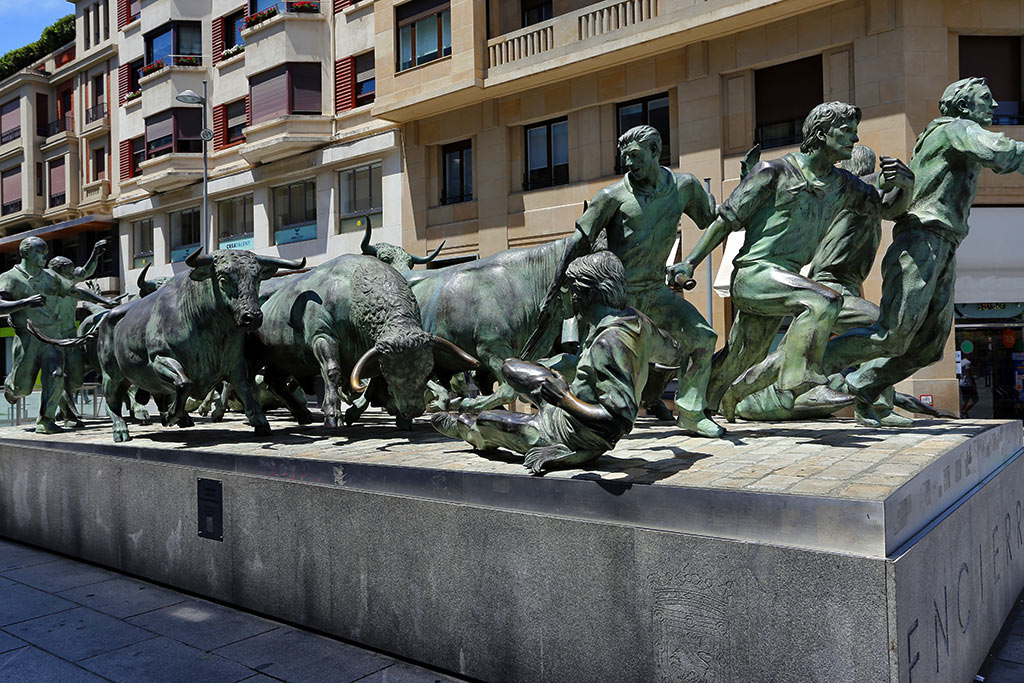 Statue of Encierros of Pamplona 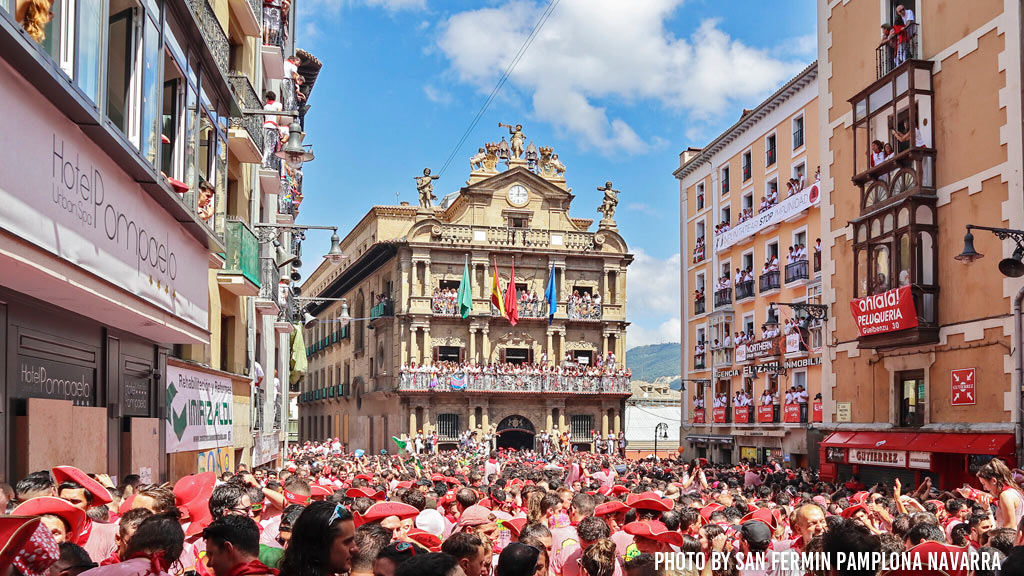 Feast of San Fermines in Pampelone

Pamplona is a pleasant and well-located city : to the north, a few dozen minutes away, are the Pyrenees valleys and their pretty little villages, to the south, medieval villages and wine-producing regions open their doors to you.