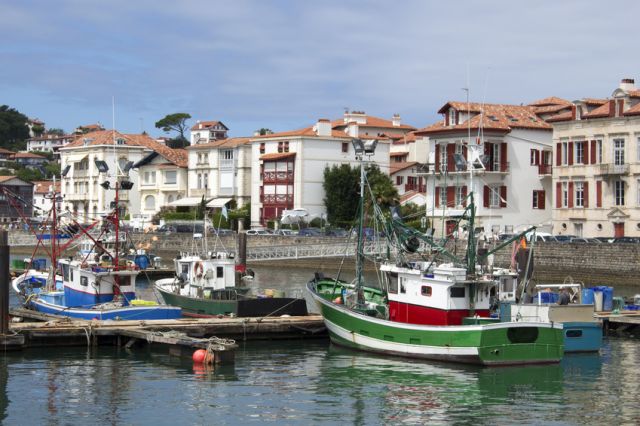 Labourd is on the maritime side of the Basque Country. It stretches from the borders of Gascony to the Pyrénées and Spain; from the long beaches in the south of Landes up to the steep coasts of Anglet starting in Biarritz and stretching up to Hendaye, to creased and steep-sided cliffs.

Labourd is a 10km long coastline with famous seaside resorts and typical ports such as Biarritz, Hendaye, and Saint Jean de Luz; and of course Bayonne, the gateway to the Basque country. Bayonne sits at the confluence of the Nive and Adour Rivers.

The appeal of Labourd first strikes the visitor with its many small typical villages such as Ascain, Sare, Ainhöa and Espelette,famous for its peppers. In the middle of green countryside you will find traditional rural architecture with superb green and red Labourd houses, squares and pediments, churches and galleries… 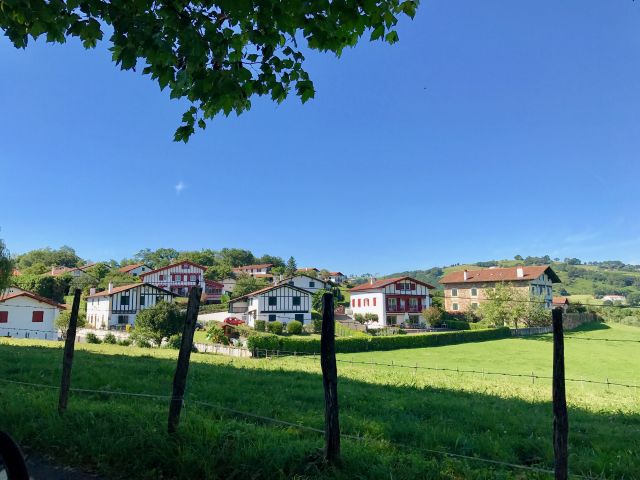 Attracted by the mild climate, the first traces of human occupation are very old, as seen by the many dolmen and rock shelters.

First under Celt rule, then Roman rule, Labourd was evangelised by Saint Léon in the Middle Ages. After being part of Aquitaine, Labourd was under English rule for many years. This was the period when the Basque ports flourished. There was trade, whale fishing, pirates who built superb houses to show their wealth, sailors and merchants who were appreciated by the Kings of England. During this time Labourd was prosperous. 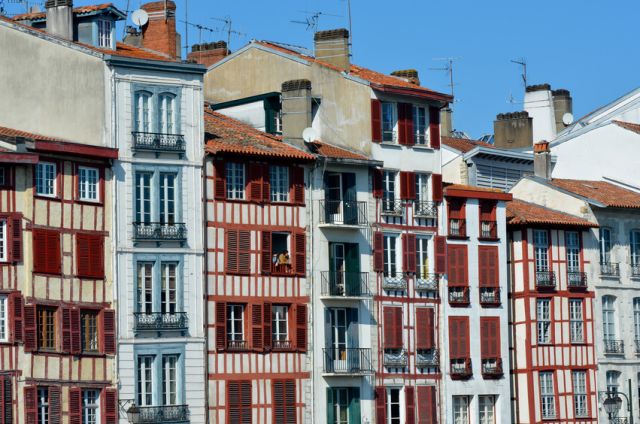 After Joan of Arc drove the English out of France, Labourd became French. In 1160, in Saint Jean de Luz, the wedding of Louis XIV and the Infanta was welcomed by the population.

Under the “Ancien Régime” (Social and Political Institutions of the French Monarchy), Bayonne lived under the “Coutumier” (law of the monarchy), the rest of the region was under the “coutume du Labourd” (law followed and recognised by the inhabitants of Labourd.)The revolution and the administrative redistribution of the territory changed everything, from that time the Basque Country became part of the “Basses Pyrénées” department which later became the “Pyrénées Atlantiques”.

Since then the nationalist movement evolved in the region, on the Spanish and French sides of the border, with a continuous claim for the creation of a French Basque Country Department including Labourd and its ancient sister provinces, Basse Navarre and Soule. 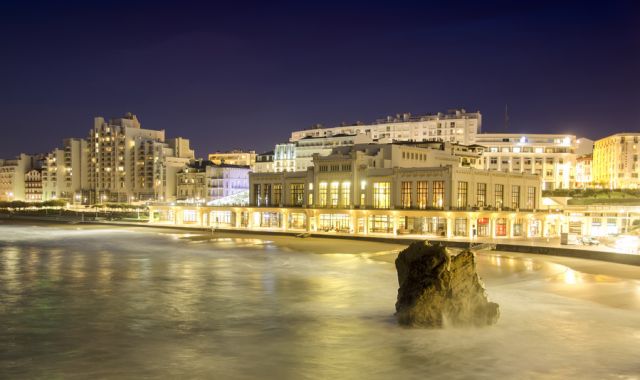 Today Labourd, which used to be less in the spotlight than neighbouring Navarre (which had a more tumultuous history), is the main region of the Basque Country. This is due to its rapid tourist growth which took place during the paid leave period*******. Balneo therapy was available which brought in tourists. There was also the development of a luxury tourist trade promoted by artists and other famous personalities who, by settling in the region, made Labourd a very sought after area.

Thus, on a narrow coastal strip, you can find some world famous seaside resorts such as Biarritz with its luxury hotels, Thalasso therapy centres, golf courses and casinos.

This part of the Basque Country is very sought after for its way of life, its gastronomy (Bayonne ham, chocolate, Espelette peppers, Gascon and Spanish cuisine), its popular festivals, its architectural heritage, its typical villages and especially its cultural identity which is promoted today by new activities such as surfing, the new symbol of the Basque Country, but especially of Labourd.

Surfing originated in Hawaïi and Tahiti, in the Pacific Ocean, and today it is one of the economic and sporting emblems of the Basque Country.

Surfing arrived in the Basque Country via the United States. In 1957 the American producer Peter 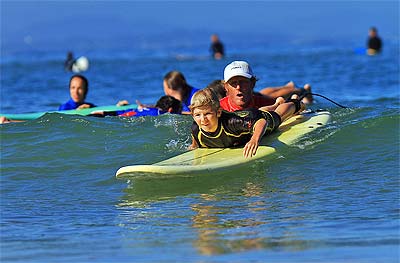 Viertel was shooting Hemingway's 'The Sun Also Rises'. Viertel was seduced by the Basque waves and had his surfboard shipped to France. In 1959, the first French Surf Club was created in Biarritz. While the main venues and most championships were still outside France, in 1963, the first French International competitions were organised in La Barre at the mouth of the Adour River. In the sixties, ten surf clubs were created in the Basque country.

Today, in April, Biarritz hosts the first surf competition of the European calendar, the Biarritz Maïder Arosteguy. In August, Anglet, another big surfing spot on the coast, welcomes the WQS ProAnglet. There is also the French Surf Championship, which takes place in October in Biarritz.

Surfing in the Basque Country is also part of the culture, with its festivals all summer long. This includes the famous Biarritz Big Festival and also the International Anglet Film Surf plus Festilasai and the Saint Jean de Luz Baleapop Festival.

Belharra Wave Information: these waves form during the autumn and winter off the Basque coast. They are the only giant waves in Europe. The name refers to the steep submarine rock which allow them, in some specific climatic conditions, to be formed. The wave can then reach 10 to 15 metres high! But beware: it can only be surfed by professional surfers pulled beyond the breakers by jet skis.

You can find all Surfing Information on the Basque coast on Surf Report. 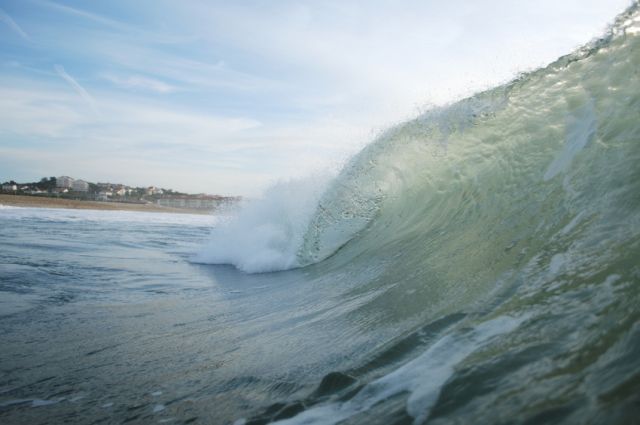 Already known in the Middle Ages, this famous culinary specialty is referred to in Rabelais literature. Bayonne ham is rubbed with salt from the Bassin and Espelette pepper. Once covered with salt it is hung in the open air for 7 to 10 months to dry out. Bayonne Ham is subjected to very specific quality controls in order to be called 'Jambon de Bayonne '. Each Easter there is a big Ham Fair in Bayonne's Reduit Square where traditional hams produced by the small Basque butchers can be seen.

Check here for our selection of addresses 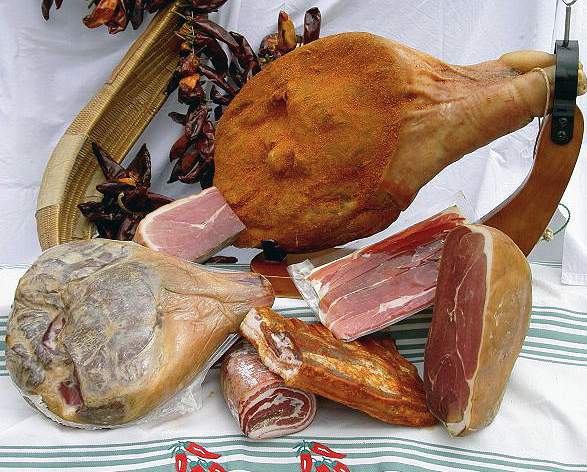 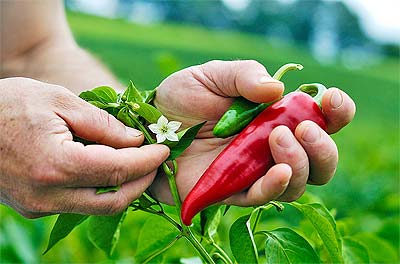 Imported from Mexico and Colombia to Europe via Spain, the pepper first arrived in the Basque Country in order to improve…. chocolate ! Today the espelette pepper is the symbol of the French Basque country. It is prized by all the greatest Chefs in the area, as well as by chefs from beyond Labourd and the Basque country.

Espelette is a village that is decorated with red peppers in September when strings of peppers are hung from the house facades to dry them out. It is a sight not to be missed.

Each year thousands of people visit Espelette for the traditional Pepper Fair! Since the sixties, some thirty producers grow the pepper, which obtained the AOC (controlled designation of origin) in 1999.

It would seem that outside its taste qualities, the Espelette pepper also has, according to the elders, healing power! 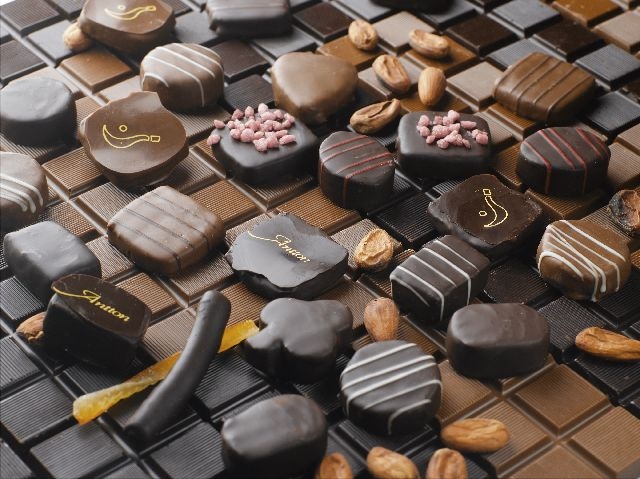 Chocolate arrived from America into the Basque ports. This trade was very important and factories to process it were built in Bayonne and Biarritz. Discover the secrets of chocolate making at the Chocolate Museum in Biarritz. There are many reputable Basque chocolatiers who are worth a visit. You can find a selection of them by clicking HERE.

Rugby in the Basque Country centres round two opposing clubs: the “BO” or Biarritz Olympique, which has won 4 National titles since 2000. They also play in the European cup.The other club is the “Aviron Bayonnais”. It is a popular club which has a great atmosphere before a match.

There are also many other rugby clubs in the region. 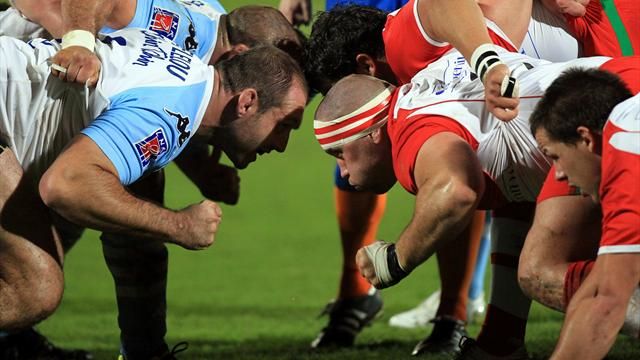 In the Basque language, " Izadia " means " nature ". Lovers of the great outdoors and ecology, children an ...