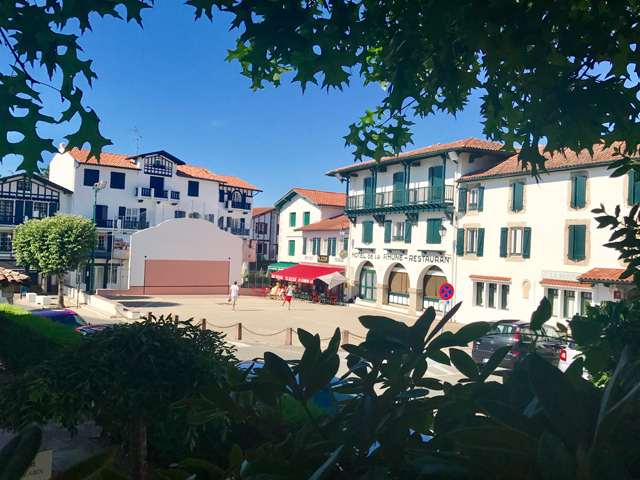 Situated in the extreme South-West of France, the French Pays Basque is part of the “départment” of the Pyrénées Atlantiques, which also includes Béarn. Much of the population is calling for the creation of a recognized Pays Basque “département”.

The Pays Basque stretches to the South of the Adour River, along the Atlantic Coast, the Pyrénées mountains and the Béarn, three former provinces. They are:

The Côte Basque (Basque Coast): after the large beaches of Les Landes, the shoreline becomes very steep and jagged from Biarritz and further south. The Basque Coast has a succession of cliffs until you reach Hendaye rising to 50 metres in height.

The Basque Mountain is located in the Western part of the Pyrénées where the peaks are less steep; Pic D’Orhy in Soule is the highest peak in the Basque Country at 2017m. Generally the highest peaks are situated to the East of the region, towards Béarn and to the South along the Spanish border. 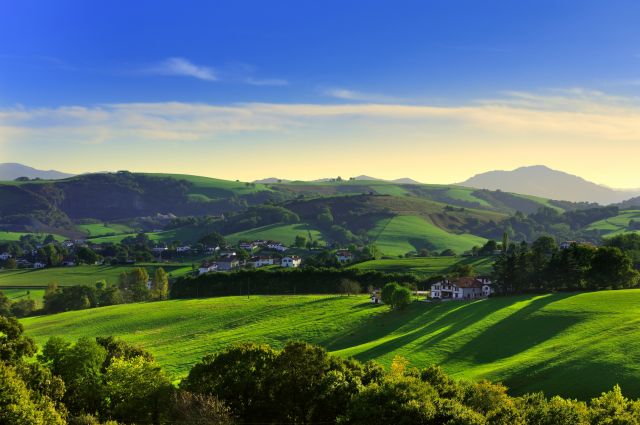 The Basque Country climate is temperate and mild. The yearly average temperature stays around 13°C thanks to the influence of the Gulf Stream and the natural barrier protection of the Pyrénées mountains. Autumns and winters are mild and pleasant; spring is rather mild but wet and summers do not see excessively high temperatures. Rainfall makes the Basque Country a green landscape all year round.

HISTORY OF THE BASQUE COUNTRY

Various ages define the history of the Basque Country. 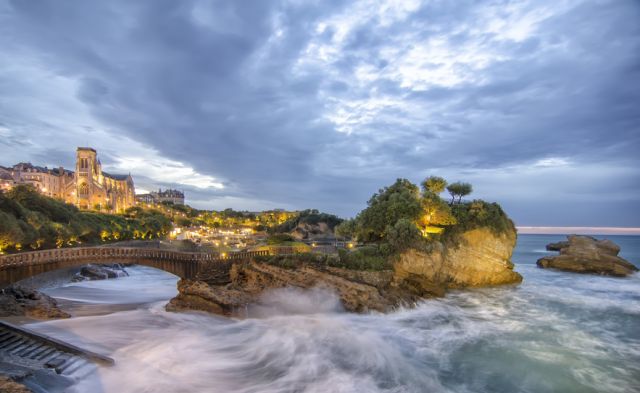 The history of the Basque Country starts with the Palaeolithic period. The first vestiges are traced back to 100,000 years BC and some significant cave paintings have been found dating back to before 35,000 years BC. They were discovered for example, in the Isturitz cave.

The Neolithic period sees the building of the first villages and the development of agriculture and herding, the Basque Country then had 10,000 inhabitants.

Romans founded the camps of Bayonne, Haspparen and Saint Jean le Vieux and used the Basque ports. They built the Roman road between Bordeaux and Astorga. During Roman times, trade prospered, the vine was introduced and ore was extracted. The "Vascons", the biggest ethnic Basque group, took refuge in the mountains; they only came down after the collapse of the Roman Empire and raided the towns. They were not lead by any particular leader, which shows that, even at that time, there was the emergence of an independent and egalitarian society.

During the Middle Ages, the 3 Basque provinces were dominated by various groups.The most significant was based on the Spanish principle of the “Fueros” (local laws and privileges extended to towns, provinces, or particular groups) providing them with a political and administrative economy ahead of their time. Navarre was the best example, the kingdom of Navarre was then at its peak.

The French revolution and the abolition of a privileged society brought an end to the Fueros system, the King of France and Navarre became King of the French. In 1792, the deputies of Labourd could not for long oppose the creation of the department of the Basses Pyrénées, during the proclamation of the Republic and the restructuring of the new administrative areas of France; Pyrénées Atlantiques consequently incorporated Béarn and the Basque Country.

It is from that time that the Basque people felt they wanted autonomy. The translation of all official French texts was rejected by most Basque inhabitants who requested that they be published in Euskera, the Basque language, in order to be understood by the whole Basque population. Now everything is in place for the development of Basque nationalism on both sides of the boundary, France and Spain. This seemed the only way for the society, caught between two countries, to defend their language and their “country”.

The policies of General Franco’s regime in Spain, the bombings of the Spanish Basque villages, including the infamous Guernica, and the wall of silence reigning all over Spain, regional identity was ignored. This led, on the Spanish side, to the radicalisation of the movement towards independance resulting in the creation in 1959 of two simultaneous activist movements: Enbata in the north and ETA in the south. Their slogan was "Euskadi Ta Askatasuna" - "The Basque Country and its freedom".

It was only in 1975, when General Franco died, that Juan Carlos, King of Spain, legalised the Basque language in the same way as Catalan, Galician and Castillan were recognised. The autonomy in the south is on its way but it will not be an easy process, the northern activist movement Iparretarak ("Those of the North") also joined ETA. The independent community, Euskadi, south of the boundary, was created in 1979. The political military branch of ETA gradually changed into a political party with Herri Batasuna who wanted "popular unity " participating in elections. The new Basque parliament was instituted in Vittoria in 1980.

The eighties are not all peaceful. During the time of the socialism of Felipe Gonzales in the south and François Mitterrand in the north there were a number of extremist acts carried out by the separatist group, Groupes Armés de Libération (GAL). There were the arrests of violent protesters in France. Basque political refugees were arrested by the Spanish police in public places such as bars in Bayonne or Hendaye. The promises of François Mitterrand to create a Basque department in the north never happened and did not help to calm the situation.

It was only in the nineties that the peace process on the Spanish side started paying off. But extremism is still present and claimants for autonomy are now showing a tendency to radicalism, even if ETA (separatist group) shows some signs of weakening and prefering to talk about the political management of the conflict. The new Spanish government of Zapatero has played a key role in reducing tensions but the decommissioning of weapons is not totally finalised. On the French side, the situation is closely monitored, especially as Corsica was given some concessions. This has not gone down well with the French Basques who always claimed independence which was rejected by the French government. The History of the Basque Country is not quite finished yet.

Despite all this turmoil, during the 20th century the Basque country became a very trendy tourist destination.Balneo therapy tourism developed, especially around cities such as Biarritz which was a luxury resort with tailored amenities. Hotels and Thalasso therapy centres sprang up along with golf courses and casinos. There was a trend towards fitness tourism with the development of surfing and other activities.

The Basque Country managed to take advantage of its identity and make it a trendy “brand”, its traditions and popular fairs, the art of the “good life”, the quality of a protected architectural environment.... 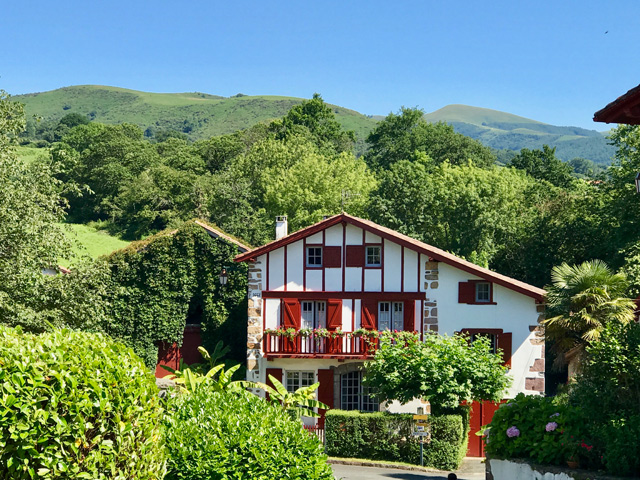 the three PROVINCES of the PAYS BASQUE:

Presented in our chapter “Visiting the Basque Country” you will discover the highlights of the historic, architectural and natural treasures for each of these former provinces :

The Basque Country offers many treasures: castles, churches, priories, caves, museums and beautiful countryside…many reasons to stay in the region. 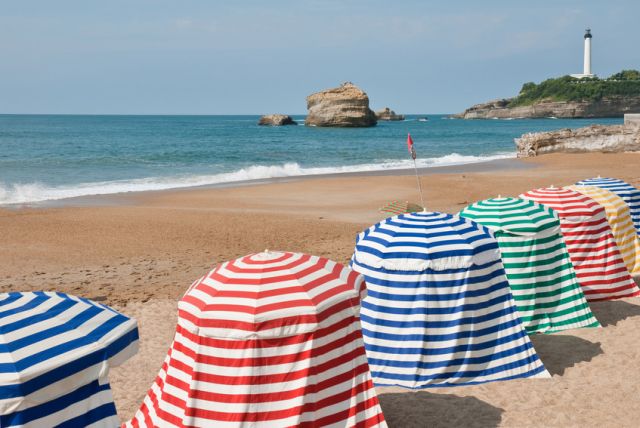 FROM THE treasures OF THE LOCAL PRODUCT...

Pays Basque products are renowned, the highlights include:

... to the best local dishes and basque cuisine

Basque gastronomy is very rich, with the influences of Gascony and Les Landes to the north and Spain to the south. Enjoy fish and pork dishes as well as tapas! There are many good restaurants in the Basque Country, do not hesitate to stop and taste the local cuisine.

In our chapter "Accommodation" you will find all the options you would expect: campsites, guesthouses, self-catering accommodation, holiday villages, Bed & Breakfast and hotels of all ratings. From the most luxurious room to the most basic one, you will find something to suit you in the Pays-Basque.

To help you discover the treasures of the Basque Country, many activities are on offer: strolls along the Corniche Basque (Basque Coastal Road) or the mountain trails (mountain biking, rock climbing). There are seaside activities (surfing, parasailing, fishing and boat rides) and all white-water activities (rafting, etc). Discover the activities that make the culture of the Basque Country: the different games of Basque pelote (Cesta Punta, Main nue, Chistera) and the games of “force Basque” (Corrida, golf and of course rugby)!

Visit our chapter "Sports and activities" 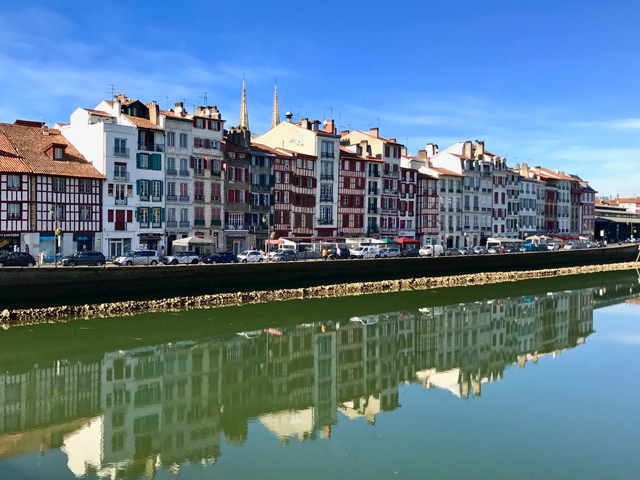 All year long, the Basque Country is at the centre of numerous Saint celebrations and country fairs, festivals, cultural and culinary shows. These include: 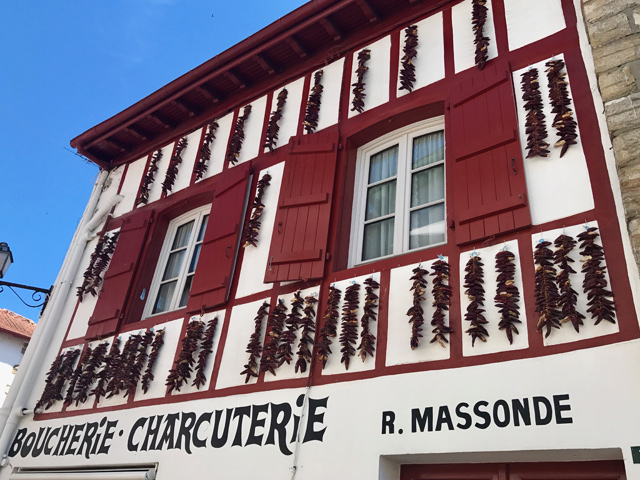 THE PAYS BASQUE… IN the BOOKS AND IN THE MOVIES

The Pays Basque has an extended list of historical and visitor guides, below are some of them: As every year, the castle of Abbadia and its gardens reopened their doors to the public after the annual c ...